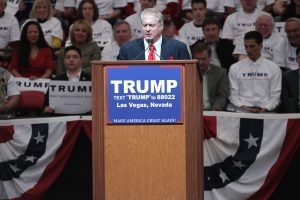 Few (if any) conservative media personalities have ever experienced 48 hours like I just experienced. I just lived in the eye of a hurricane. Call it, “Wayne’s World.”

It all started with my Newsmax TV show last Tuesday night. I took a call from a viewer who wondered why Jews vote Democrat, when it’s clearly against their self-interest. And then…

I stepped into history.

I answered by reporting a few simple facts (let me paraphrase): I’m a Republican Jew who loves and appreciates President Trump. Trump loves Israel. And Israelis love Trump like no president in the history of America.

Folks, these are facts. Why would they create a media firestorm?

I also said (off the cuff) that Trump is so popular in Israel, they treat him like “the King of the Jews.”

And then came the clincher. As I’ve said a thousand times on my national and radio shows, it’s time for Jews to vote Republican because Trump is the greatest president ever for the Jewish people.

The President watched my TV show. He tweeted out his thanks to me, as well as an exact quote of my words, in a series of tweets.

That’s when the liberal media lost their minds.

That message obviously scares them to death. Clearly, they’re even more scared of that message in the hands of a talented Jewish communicator who speaks with evangelical zeal about bringing Jews to the GOP promised land. Most of all, they’re scared that Trump brought my message to the attention of the world.

President Trump next tweeted out his 4th tweet of the day about me. He was watching my TV show for the second night in a row. He thanked me again, but this time he included a 3 ½ minute video from my TV show. So far, it’s been watched 1.6 million times (and counting).

No wonder liberals are so scared.

It all comes down to this for liberals:

A) If you can’t beat your opposition, make it personal. Destroy, malign, slander and demonize him.

B) The truth to liberals is like a Christian cross to a vampire. So, if someone exposes the truth, by any and all means, use “weapons of mass distraction.” Change the subject. That’s what the liberal, biased, mainstream media did to me.

I’m a witness to their ruthless strategy. From that moment on, all hell broke loose. The whole media world exploded with rage. At me.

I was the main subject of every show on CNN, MSNBC, the evening news, Washington Post, Esquire, every liberal web site, the cover of the NY Daily News. The liberal media tried to destroy the messenger (me).

They failed. Just as they always do with President Trump. After their attacks, he always goes up in the polls. It’s simple. The hateful liberal media brings attention to Trump, which makes more Americans tune into Trump. And once they experience Trump, they like him and agree with him.

Thank you, liberal media. You just made me into a conservative media superstar. Just like you always do for Trump. God bless you. Keep attacking.

My only request is: Let’s engage. Instead of slandering me behind my back, why not debate face to face? Scared? Afraid I’ll win the debate? Cat got your tongue?