Anyone Want to Play Poker with Trump? 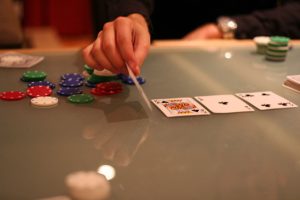 I was going to write Part II of why California is burning. But that takes a back seat to impeachment and the latest economic news.

So, I’ll shorten “Why California is burning” story. California is burning and blacked out because of insane liberal policies. First and foremost, as I pointed out in my last column, hundreds of billions of dollars have been wasted over the past 20 years paying for illegal immigration, instead of upgrading and modernizing the California electric grid. The chickens have come home to roost.

The secondary cause for California’s nightmare is environmental policies that won’t allow brush clearing, controlled burns, or cutting down dead trees.

The third cause is climate change mandates that force utility companies to waste billions of dollars annually on green energy (wind and solar).

I could solve California’s problems quickly. Clean out the forest and redirect all those billions of dollars to upgrading and modernizing your electrical grid. Simple. Problem solved.

Now, onto the two most important stories in America today. Both play right into President Trump’s hands. Impeachment and the economy. They are linked together like Yin and Yang. Both storylines will lead to a Trump re-election electoral landslide.

First, impeachment. The game is on. The House voted along hyper-partisan lines to open the impeachment inquiry. And the Democrat Party marched in lock-step like sheep off a cliff.

No big deal, unless Democrats have any interest in winning Michigan, Wisconsin, Pennsylvania, Florida, North Carolina, and Arizona.

I’ve seen a half dozen other polls- all with the same results. Trust me, this impeachment witch-hunt is the biggest mistake ever made by Democrats.

The Trump economy added 128,000 jobs in October. That number blew away the economists’ estimate of 75,000. This was despite a massive General Motors strike. Take that away and the number would have been in the neighborhood of 200,000 new jobs.

More importantly, the August and September jobs reports were revised dramatically higher- which means the economy is much stronger than initially reported. September was revised up by 44,000 jobs. August was revised up by 51,000 jobs. That brought the three month average up to 176,000 new jobs per month.

The overall unemployment rate of 3.6% remained at or near historic lows. The total amount of Americans employed jumped to 158.5 million, a new all-time high.

And average hourly wages went up too- a year-over-year gain of 3%. Everyone is working and everyone’s salary is going up.

Black unemployment dropped to the lowest ever. Yes, Trump is some “racist.” With racists like this, who needs friends?

To date, Trump has added over 6.5 million new jobs. At the exact same time in his presidency, Obama had lost 2.3 million jobs. That means Trump has beaten Obama by almost 9 million jobs.

That’s why impeachment is linked to Trump’s economy. They are Yin and Yang. Because what can Democrats say in the face of these great economic numbers? They’ve got nothing. If I was a Democrat leader, I’d talk impeachment too. It’s their only card to play.

So, anyone want to play poker? I’ll put the Trump economy up against the Democrat impeachment inquiry all day long.

Good luck to Democrats. You’re gonna need it. I’ll take the Trump economy and raise you 350 electoral votes. If I was you, I’d fold quickly, before you get hurt.