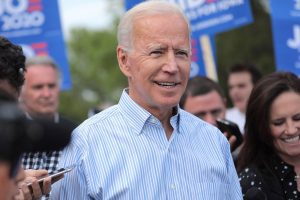 President Trump loves branding his opponents. Boy, do I have the brand for Joe Biden. Other than “Basement Biden.” Or Biden is the leader of the “Dementia-crats.” Those two are effective and memorable too.

But nothing beats this little ditty: BIDEN stands for “BIGGEST IDIOT DEMOCRATS EVER NOMINATED.”

Forget Biden’s nonstop stumbling and bumbling. Forget that he appears to not know where he is (he talked about New Hampshire, but was in Vermont)…what day it is (remember “Super Thursday”)…what year it is (remember in the presidential debate when old Joe said “Joe203030”)…or who he is (remember Joe opening a speech with “Hello, I’m Jill Biden”). Forget all that.

Forget his lifetime record of 40 years as part of the DC Swamp establishment, accomplishing nothing for the American people.

Forget about the massive corruption in China and Ukraine, with his son Hunter as the bagman.

Forget about presiding over the worst economic recovery in America’s history.

Forget about supporting AOC’s $10 trillion Green New Deal that will bankrupt the US economy and kill millions of jobs forever.

Forget about old Joe’s radical new beliefs in open borders and “defund the police.” Oh, and Biden also said recently, “the police are the enemy.” Process that for a minute.

Forget about his racist past, compliments for a former KKK leader, and use of the “n word” on the Senate floor. Or telling black Americans that if they vote for Trump, they aren’t black.

Forget about his clear dementia issues. Or the fact he can’t answer a single question by a reporter that isn’t pre-scripted, with the answer written on teleprompter.

Forget about the lack of intensity or enthusiasm by potential Biden voters. Poor old Joe was on a nationwide video livestream conference the other day with 19 people tuned in.

And during that video livestream conference he grew confused multiple times, could not remember the word “aneurysm” and promised “voter registration physicians” at the polls.

But forget all of that.

Joe just said two things so stupid, moronic, mindless, revolting, and offensive to most Americans, we should just freeze the election right here. Let’s roll the dice. Let’s base the whole election on Biden’s latest statements about Islam.

President Trump should feature Biden’s own words in every TV commercial from this point on. I’ll bet my life savings it’s game, set and match. Checkmate. Biden is finished- if you keep playing these two statements.

With all the problems plaguing America, from Covid-19; the economic meltdown; riots in the streets; mob takeovers of Portland and Seattle; and a potential war with China; with all of that, Biden thinks the big problem is we need to teach more about Islam in the schools. That’s a quote.

Mr. President, relentlessly repeat Joe’s words every day from now through the election. Trust me, the American people will be as disgusted, offended, shocked and appalled as me. Last I checked, we no longer allow Christianity to be taught in schools. Liberal lawyers make sure we take down Christmas displays from public properties. Yet teaching more Islam in schools is okay?

Personally, I have nothing against Islam. It’s a perfectly good religion…as long as we forget the suicide bombers…use of human shields…gays being thrown off buildings…women being stoned to death…little girls disfigured by acid for wanting an education…women sent to prison for being gang raped…honor killings…soldiers set on fire in cages…genital mutilation…and don’t forget artists being murdered for drawing a cartoon of Mohammed. Other than that, it’s a swell religion.

But wait, there’s more. Joe just promised on day one of his presidency to end Trump’s “Muslim Travel Ban.” It’s THAT important to deal with it on day one. Basement Joe is horrified that we don’t have more immigrants from the terrorist havens of Somalia, Yemen, Iran, Afghanistan, Libya, North Korea and Venezuela.

Isn’t this just what America needs during a pandemic and economic collapse? Teaching Islam to your kids. And welcoming in Iranians, Somalians and Yemen-ese. I can’t wait. How about you?

That’s why Biden stands for “BIGGEST IDIOT DEMOCRATS EVER NOMINATED.”