Colin Powell’s Big Announcement- Proof that the 2-Party System is Big and Bigger, Dumb and Dumber 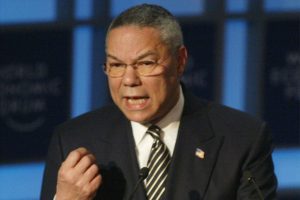 I sat stunned on Sunday morning upon hearing that Colin Powell had endorsed Barack Obama for President of the United States. Stunned, but completely at peace with my decision to leave the Republican Party two years ago. I left because the GOP had abandoned freedom-loving, limited government, anti-tax, fiscal conservatives like me. I left because the expansion of government under President George W. Bush was larger than any big-government liberal could have dreamt about under a Democratic President. I left because of my Republican President’s willingness to violate the civil liberties of law-abiding American citizens (warrantless wiretaps). I left because of the willingness of a Republican-controlled Congress (at the time) to ban the chosen form of entertainment (online poker) of millions of Americans in the privacy of their own home, on their own computer, with their own money. I left because the GOP had become so manipulative, hypocritical and controlling that it tried to force the power of the federal government upon a brain-dead woman in a coma in the last days of her life (Terri Schiavo).

My decision was reinforced recently when GOP Presidential candidate John McCain joined Barack Obama in supporting the greatest federal power grab and rip-off of taxpayers in the history of America (the trillion dollar bailout of banks, housing, AIG and Wall Street). A bailout filled with waste and bribery, yet supported by McCain- the man who claims to fight earmarks and waste with his every breath. A bailout filled with handouts to firms that manufacture wooden arrows, wool, rum in Puerto Rico and products in American Somoa. A bailout that provides tax breaks for bicycle commuters (that is sure to save the U.S. economy). A bailout that socializes the banking and financial system of the United States. A bailout that gives the I.R.S. expanded powers for undercover sting operations against our own American people.

If John McCain had chosen to take a stand against the bailout, the election would have been his. Yet even in this moment that so clearly defined big government vs. limited government; Big Brother and big corporate interests vs. American citizens and taxpayers; capitalism and personal responsibility vs. socialism; John McCain and the GOP joined hands with Barack Obama and sang cum-ba-ya. They proved that there are no longer any big differences between the 2 major parties.

But nothing has made me feel better about leaving the GOP than Colin Powell’s endorsement of Barack Obama. Can you even imagine? For months now as the Libertarian Vice Presidential candidate, as a guest on hundreds of radio talk shows and media interviews, I’ve said that there is no longer any big difference between the 2 major parties- they both support the same long term goal: BIGGER GOVERNMENT. I dubbed the Republicans and Democrats “big and bigger, dumb and dumber.” Neither has any interest in defending the constitution. Neither has any interest in supporting beleaguered taxpayers. Neither has any interest in actually cutting the size, scope or power of government. Both parties believe in nothing, but the core principles of bribing the electorate with handouts and entitlements; supporting the lawyers, lobbyists and corporations who provide the biggest campaign contributions; and taking more control over the lives of ordinary Americans. Both major parties crave one thing and one thing only: POWER. That much is now clear.

The endorsement of Democrat Obama by Republican hero Colin Powell makes my case. Supporting McCain and his ideas for bigger government would have been bad enough. Enough to make my heroes Thomas Jefferson, Barry Goldwater and Ronald Reagan roll over in their graves. But Powell didn’t choose McCain’s vision of big government. That wasn’t big enough for Colin Powell. Powell chose Obama’s vision of FAR bigger and more intrusive government. Powell chose Obama’s vision of re-distribution of wealth. Powell chose the most draconian tax increases in American history. Powell chose a man who supports the punishment of the successful citizens in our society, in order to reward the rest (Obama’s core voters) with handouts, entitlements and outright bribes. Powell chose a man named by the National Journal as the most partisan left wing extremist in the entire United States Senate.

Powell has chosen a man that is against tort reform- who literally wants lawyers to run wild and unleash lawsuits across America. Powell chose a man that is against school choice and vouchers- even if they might help black students in the failing hellhole public schools of Washington, D.C. Powell chose a man who supports a government takeover of health care. Powell supports a man who has opposed offshore oil drilling his entire career, while in bed with radical left-wing environmentalists. Powell supports a man who on every issue is to the extreme left of everything mainstream America believes in, let alone what conservatives and Republicans in his own party think. Colin Powell chose socialism.

If Colin Powell could make that choice, as have several other GOP power players like former U.S. Senator Lincoln Chafee and former Congressman Jim Leach, then the difference between the 2 major parties has blurred to the point of indistinguishable. Powell’s announcement proves that there is no longer a GOP. The party of Goldwater and Reagan is dead. The party of fiscally conservative, limited government principles is long gone. There are no longer any principles left in politics, if a Republican can leave his party to support a radical left-wing, tax-raising, redistribute-the-wealth, socialist who supports a government takeover of health care. Powell has sealed the deal.

McCain may yet win this election against all odds. But it won’t change a thing. The charade is up. There is no longer any big difference between Republicans and Democrats. Not when a Republican hero like Powell can choose Big Brother socialism without blinking. Big and bigger, dumb and dumber. It’s now a reality.

It’s time for change all right. But neither McCain nor Obama will change anything- except for the worst. Among the 2 major parties there is only a choice between a moderate Democrat and a socialist. Sadly, McCain is playing the role of the moderate Democrat who will simply continue President Bush’s expansion of government. Throw into the toxic mix the continued violation of civil rights (in the name of “security”); nonstop wars across the globe; and the endless expansion of military spending- all of which will lead to the bankruptcy of America.

On the other hand, Obama is a far-left socialist who will expand government far beyond anything ever imagined. Obama will choose to tax successful citizens to death (literally- by bringing back the death tax and raising the rates of taxation on money we all have left on the day we die AFTER a lifetime of paying taxes). He will bankrupt America even sooner- by handing the keys to government spending to his friends- lawyers, lobbyists, radical environmentalists, obstructionist teachers unions, and greedy government employee unions. No matter who is elected, McCain or Obama, American taxpayers face a bleak future. It’s bankruptcy soon, or sooner.

Or voters can choose Bob Barr and Wayne Root. For real change- smaller government; dramatically reduced spending; lower taxes; school choice; energy independence through drilling for our own natural resources; more freedom and rights for gun owners; and more freedom and individual rights for the American people. Most importantly, we stand for less power for the politicians and government bureaucrats, and more power to the people. If that’s the kind of change you desire, it’s time to leave behind big and bigger, dumb and dumber. I invite you to join the Libertarian Party at: www.LP.org