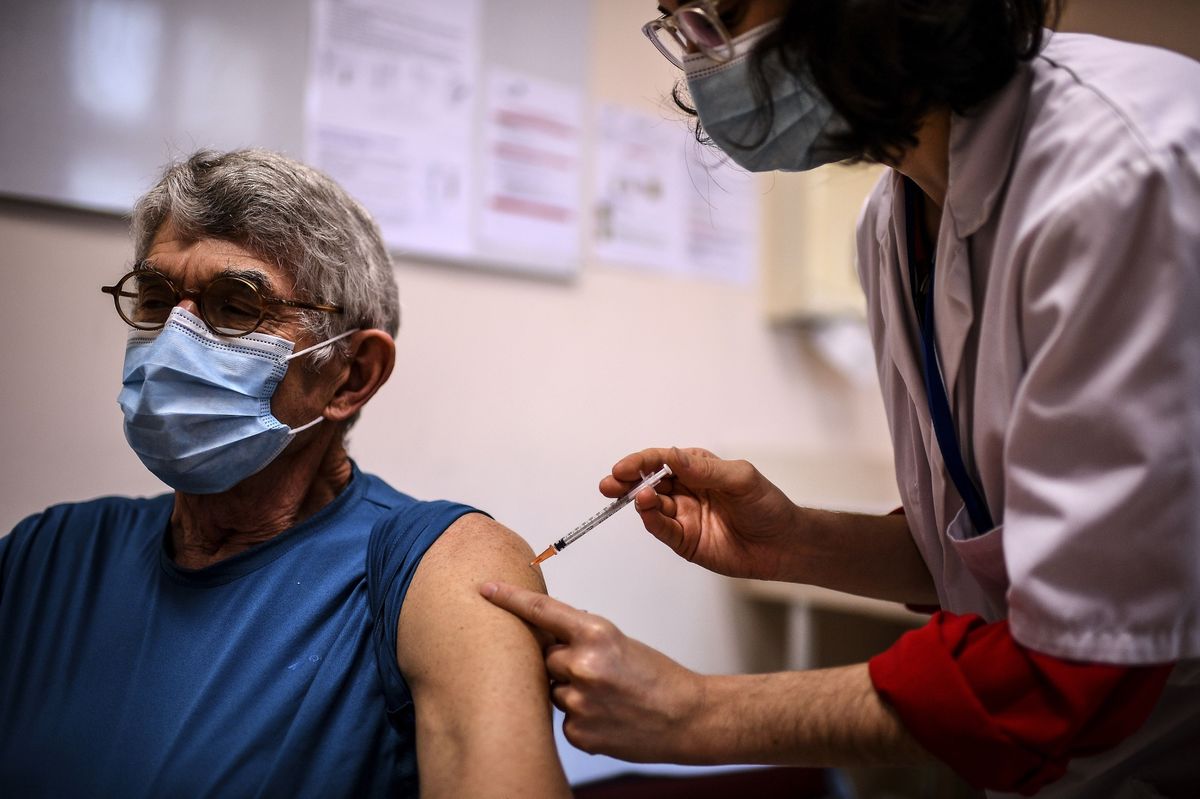 Here is Who is to Blame for the Deadly Covid Vaccine Disaster and Coverup. Hint: It’s Not President Donald J. Trump.

Every day it becomes more clear what a disaster the Covid vaccine is. Data from all over the world is showing proof that those who are vaccinated are much sicker, more often hospitalized, and dying in far higher numbers than the unvaccinated.

In both Europe and the USA, the mortality data clearly shows a massive, never-before-seen-in-world-history, increase in non-Covid deaths since literally the day the vaccine mandates started.

In the beginning, I was one of the only radio and TV hosts pointing out what a disaster this was and how terrible the early results were. But I sure was feeling mighty lonely. Most conservative TV and radio hosts went along with the fraud. Of course, it turns out their networks were paid millions of dollars to coverup the deadly results from the Covid vaccine.

Now suddenly everyone is waking up from an almost two-year slumber. The lightbulbs are going off. Conservative talk star Dan Bongino just days ago called getting the vaccine “the biggest regret of my life.” He now realizes he has a ticking timebomb in his body that could cripple or kill him sometime soon. He regrets getting it. He regrets ever encouraging his fans and listeners to get it.

Tucker Carlson has gone from warning the Covid vaccine doesn’t work and it’s a huge failure, to reporting dramatically rising death rates in countries all over the world. He even reported data that shows you’re much more likely to die if you’re vaccinated versus unvaccinated.

Welcome to my world Tucker. I’ve been reporting this data every day on my national radio show for the past 18 months.

When everyone around you is vaccinated and dying,

I guess there comes a point where it’s hard to avoid admitting there’s a disaster going on. So now even Democrats are starting to talk about vaccine deaths and injuries. But guess who they’re blaming?

Democrats live by the saying, “Never let a crisis go to waste.” So now they’re starting to blame President Trump. Right now, it’s a trickle. Soon it will be a tsunami. This will be the new Democrat talking point moving forward.

Everyone sees it. It’s impossible to ignore. So many Americans are dying “suddenly.” That includes celebrities, athletes, rock stars and even doctors. Many Democrat politicians are walking zombies after vaccination- look no further than the zombie twins President Joe Biden and Pennsylvania US Senate candidate John Fetterman. They can’t even put two sentences together anymore. If those two prominent Democrats got on a stage together it would be like a combination of “Weekend at Bernie’s” and “Night of the Living Dead.”

So now that everyone sees what’s happening- from heart attacks, strokes, blood clots, and cancer to mass death- they’re going to blame it all on Trump. I’m here to tell you Trump is not to blame.

Here is who is to blame…

The CDC and WHO get 100% of the blame. They knew everything Dr Fauci knew. Yet they pushed the vaccines. And then later, after everyone with a brain saw the death toll, they recommended these death shots for children. These organizations are guilty of mass murder on a scale not seen since WWII.

Biden and the Biden administration get 100% of the blame. They certainly knew about the rising death and injury numbers by March of 2021 when Biden gave the orders to OSHA to mandate the jabs at every large corporation in America. They condemned millions of American employees to risk death or terrible injury.

Every Democrat Governor and member of Congress get 100% of the blame. They all drank the Kool-Aid like the suicidal followers of maniac Jim Jones at Jonestown in Guyana. Except this time 909 people didn’t die. This time the Democrat vaccine cult led millions to death and serious injury.

The media is 100% to blame. They are the PR wing of the Democrat Party. They covered up this entire massive tragedy. This is the biggest healthcare debacle in world history. And the media has covered it all up, blacked it out, whitewashed it. Oops. The big question is, who bribed them? Were they paid directly by Big Pharma? By the Biden administration? Or did they get insider stock info and make billions of dollars betting on the Big Pharma stocks? Maybe all of the above.

The whole mainstream media sold out- even Fox News and Newsmax. I’m guessing the biggest conservative talk radio syndicators sold out too. They all took millions to shut up. They agreed no host, or guest could tell the truth about vaccine deaths or injuries. They took blood money. They sold out all of YOU – their own customers.

Google, Facebook, Twitter, YouTube, Instagram and 99% of social media sites run by the kings of Silicon Valley are 100% to blame. They all sold out for their piece of gold. By banning and censoring any mention of vaccine deaths or injuries they were a gigantic part of this mass death conspiracy. The big question is, who bribed them? Were they paid directly by Big Pharma? By the Biden administration? Or did they get insider stock info and make billions of dollars betting on the Big Pharma stocks? Maybe all of the above.

Doctors across America are 100% to blame. They knew. They saw their patients dying. But they were too greedy, or scared of losing their license to speak out. The doctors played dumb. They were sheep. They accepted the lies of the CDC, WHO, FDA and AMA without asking any questions. They call that “science.”

I suspect Bill Gates, Klaus Schwab, George Soros and other anti-American globalist billionaires who were desperate to stuff “The Great Reset” down all of our throats get an assist-  although I’m not sure if we’ll ever know their full role in this tragedy.

The global culprit- China is responsible for all of this. They started the ball rolling. It’s clear China purposely sent Covid-19 our way to destroy our economy, plunge America into depression, destroy Trump’s re-election and overturn Trump’s victory in the trade wars.

It won’t work. Trump was the CEO of America. He’s not a doctor, scientist, or medical expert. He was lied to by Dr Fauci, Dr Birx, the CDC, FDA and a bunch of evil, greedy Big Pharma executives. Trump was defrauded just like the rest of us.

The so-called “medical experts” are responsible for the biggest disaster in history, lying to President Trump, committing fraud against the people, then acting in conspiracy to cover it up. Trump was taken advantage of, just like the American people. They defrauded us all- and these criminals are responsible for mass negligence, leading to mass murder, and then mass fraud to coverup the truth.

It’s not “Trump’s vaccine.” People are dying from the vaccines all over the world. Is it “Trump’s vaccine” in UK, Scotland, Portugal, Netherlands, Israel, or Canada- where some of the worst vaccine death data are being reported.

More importantly, Trump was against vaccine mandates from the first day. That would have protected millions of American workers who were forced by Biden to choose between their jobs and the vaccine. With Trump as President they never would have been forced to make that choice. How many employees of large corporations would be alive today if Trump was President?

So, desperate Democrats who conned and forced the American people into taking a deadly experimental vaccine can try to blame Trump, but that dog won’t hunt. Democrats praised the vaccine, Democrats mandated millions get the death shot, Democrats slandered anyone who told the truth, Democrats called reports of vaccine deaths and injuries “misinformation.”

Trump was the CEO of America trying to save lives, save jobs, save the US economy and save capitalism. But NEVER was he going to force the vaccine on a single American- adult, child, private sector employee, government employee, or military members. Trump believes in freedom. And that works for me. I’ll bet it works for 80+ million Trump supporters and voters too.

Now is the perfect time for President Trump to come out and say, “I was duped. I was lied to. Dr Fauci and the CDC and FDA lied to all of us. I am so sorry to admit the vaccine is a failure. It doesn’t prevent Covid. It doesn’t prevent transmission of Covid. And it appears many people are affected adversely- including death. I was told it worked. I was told side effects were minor. I was told the vaccine trials showed it was safe and effective. I know now those were all lies…

Based on what we know now, it’s clearly time to suspend the vaccine program and investigate what went wrong. And if found guilty of fraud and cover-up, demand everyone involved be criminally prosecuted. We must clean house at the CDC, FDA and other government agencies that allowed this disaster to occur. To make sure nothing like this ever happens again, Congress must pass a law that bans mandates for any experimental or emergency-use vaccine or drug. No one should ever force any American to choose between their job or their life. Or going to school or college and their life.”

Do that Mr. President, and you’re the President of the United States again in 2024. Case closed.