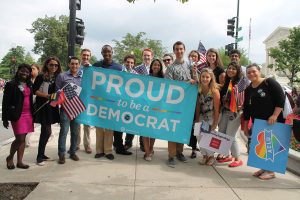 Back in November I predicted all of this. I wrote my most controversial column ever. After the GOP had lost the House, I predicted the big winner of the November midterms was…

I’m sure some of you thought I was stark raving mad. But my November prediction has proven 100% correct. Back then, I predicted putting Democrats in charge would embarrass them, expose them, destroy them. Suddenly the craziest and most radical Democrats could no longer be hidden. I believed Democrats winning the House was the best thing that ever happened to Trump. I was “on the money.”

Have you seen the latest polls? President Trump is at 52% approval at always accurate Rasmussen. FIFTY TWO PERCENT. The highest since his inauguration week. Yes, Trump is the most popular he’s ever been, after the longest government shutdown in America’s history.

It all happening exactly as I predicted. The more Democrats appear in the media, the more popular Trump becomes. Democrats are in charge- they can’t hide their crazy. It’s all out in the open for everyone to see. The Democrat Party is dangerous, extreme, reckless, radical and really, really crazy.

Take just this past week. Freshman Democrat Ilhan Omar, the first Somali-American Muslim Congressperson has been lashing out at Jews in a nonstop anti-semitic tirade. It was so bad, she was strongly condemned by her own Democrat leadership for her Jew Hatred. She called Israel “evil.” She defends ISIS. She says there is no difference between Israel and Iran. She accuses Jewish groups of “bribing” Congress. She sounds like someone who would be more at home in the Congress of Iran, than America.

The Democrats who run Virginia are trying to top her. The Governor chose KKK hoods and blackface for his medical school yearbook. The AG had to resign from a national AG organization for his blackface episode. The Lt Governor is accused of rape and sexual assault by two credible women. And let’s not forget the Governor and Democrat Senate leaders tried to pass a bill allowing abortion at the moment of birth, or even AFTER the baby is born. This is mass murder glorified as “pro woman” by Democrats.

But I’ve saved the best for last: Alexandria Ocasio Cortez is the new “Queen of Crazy.” She just released her “Green New Deal.” It sounded like it was a Saturday Night Live comedy routine. Or a parody by “The Onion.” But the joke was on Cortez.

She is demanding “total economic security” for those unwilling to work…trains that fly over the ocean…the end of all air travel…no more cars, boats or military vehicles if they use gas… she wants to knock down every building in America…and she wants to end cow farting. I kid you not.

Now I know why Alexandria Ocasio-Cortez and her fellow Democrats wore white at the State of the Union. Clearly, they all were given a day pass from Bellevue Mental Hospital in Manhattan earlier in the day!

But please crazy Democrats just keep talking. Just as I predicted, you’re the best thing to ever happen to President Trump. You are his re-election insurance policy. You’re talking Trump into a landslide.