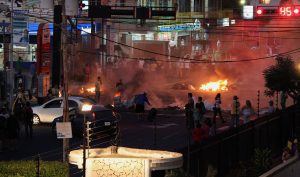 I wrote in my last column about the dangers of socialism- best represented by the ongoing disaster in Venezuela. I pointed out that many American cities run 100% by Democrats are becoming similar to Venezuela, because of socialist policies.

It’s easy to see. In Chicago there are 50 people shot and 10 to 20 killed nearly every weekend. Democrats have run Chicago for over half a century. It’s a black-on-black genocide. And there’s not one elected Republican to blame.

So, let me ask you something. Is 50 citizens shot and 10 to 20 murdered every weekend in Chicago any better than Venezuela? Actually, it may be worse. This is what Democrats have produced.

Then there’s California. Big cities like Los Angeles and San Francisco are turning into sewers- with homeless encampments everywhere, the ground strewn with drug needles, poop and pee. Remember, California is a 100% Democrat production.

But all of that pales compared to the latest news. California Democrats are now fighting to allow felons to serve on juries. Soon in California, murders, rapists, gang bangers and drug dealers will serve on juries.

Even convicted felons still on parole or probation can serve on a jury, while wearing ankle bracelets. Soon no one will be convicted of crimes in California courts. Or do you think thugs will convict thugs? California is one step removed from becoming lawless Venezuela.

Then we get to my old hometown of New York. I was there last week- as speaker at the Talkers Convention for America’s top radio talk show hosts. I am a witness to the results of Democrat’s socialist madness.

I saw homeless people everywhere. Even on famous Fifth Avenue lying in front of churches and stores for billion dollar brands. And not just any homeless people. Mentally-ill and violent homeless.

In my 27 years of living in New York and now three decades of visiting, no bum asking me for money had ever been either aggressive or threatening. That just changed. A bum asked me for money outside a nice restaurant. I said, “no thank you.” The bum’s response was “F you, mother f-er, I should cut your f-ing head off.”

This is a sign of what the socialist policies of DeBlasio have done to New York. It’s now as bad as San Francisco. That’s saying something.

Watching television news that night, I saw cell phone video of a bum swinging a hammer at passengers on a subway train. And another bum hanging off the front window of a city bus, using a large knife to smash the driver’s window. The violent madness is out of control in NY. Is this any better than Venezuela?

I saw SWAT officers with machine guns standing guard over St Patrick’s Cathedral. I sat in the worst traffic in the world and saw angry drivers cursing out cops.

I took about twenty Uber rides while in Manhattan and not one driver was American born. Many of them spoke barely a word of English. Asking them questions was impossible. We couldn’t communicate.

Is this America? Well it’s the Democrat version of America. And it’s unlivable.

And you know the thing I saw the most of? Inequality. I saw a few elite super rich New Yorkers. And pretty much everyone else was living in misery. Just like Venezuela. If Democrat policies work so well, why is there so much inequality?

I love New York. I was born and bred there. But I have no interest in ever going back. It might as well be Venezuela.

This is the nightmare Democrats produce- everywhere they rule. Our city could be next.