Mr. President, Here is What You Must Say about Black Lives Matter 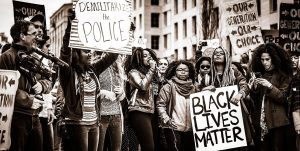 The following is the speech and advice I would like to hear President Trump deliver to Black Lives Matter protestors. And of course, it’s important for the 63 million Trump voters in the “Silent Majority” to hear these words too.

If you don’t agree, or find that offensive, too bad. If you truly want “equality” (as opposed to superiority), then you can’t march only for black lives. We have to all be in this together. If you want white Americans fighting for black lives matter, then you must acknowledge “all lives matter.”

President Reagan said, “America is the Shining City on the Hill.”  The U.S. Constitution, limited government, and a capitalist economy have done more to reduce poverty and uplift Americans, including black Americans, than any system of government and economics in the history of mankind.

While I respect the goal that I believe many, if not most BLM protestors are marching for…to make a more “just and fair” society… you need to be aware that you are being used as a tool by those who want to destroy this country. How do I know that?  Because if justice, fairness, and equality is truly your goal, your actions make no sense. Let me ask you the following:

*Why aren’t you outraged at those who burned, looted, and destroyed businesses in low-income minority neighborhoods that good people spent their entire lives building? Many of those burned or looted were black owned businesses. Do black businesses matter?

*Why aren’t you outraged that thousands of black citizens are murdered every year by young black men in our inner cities? Where are your marches or protests about that?

*Are you outraged when black cops are wounded or murdered? Do their lives matter?

*Why aren’t you up in arms that millions of black children live in broken homes and attend schools where they don’t learn even basic reading, writing and math skills? Over $400 million of property was burned or destroyed on just the first day of the George Floyd/BLM riots. What could $400 million have done for the black community? Or for the education of black kids?

*Why aren’t you concerned that good, hard-working, tax-paying black citizens are left defenseless in high crime neighborhoods by strict gun control laws? Criminals have no problem finding guns. But you are left helpless like “fish in a barrel.”

*Why aren’t you concerned that illegal aliens are encouraged to take the jobs of black Americans. And then they’re protected in “Sanctuary cities” by Democrat politicians who you vote for.

WHERE IS YOUR OUTRAGE?

If you truly care about generations stuck with poverty, crime, police abuse, hopelessness, then why are you destroying property and abusing the police? Protest at the Democrat Mayor’s and Governor’s mansions. These are the people you elected. These are the people controlling the money and economic opportunity.

If Chicago, or Detroit, or Baltimore, or Cleveland, or Newark, or Atlanta are in decay and misery, only your Democrat politicians are to blame. In many cases, those cities are run almost exclusively by black Democrats. What have they done for you? How has your life improved with them in charge?

Far too often Democrat politicians in deep blue cities only care about retaining power and lining their own pockets.

Here is a simple fact…After all these years, with trillions of taxpayer dollars spent by Democrat politicians, there is absolutely no excuse for the condition of our inner cities, for the crime, for the failing schools, for the lack of opportunity. Democrats have been 100% in charge and your life has only gotten worse.

If I were cynical, it appears Democrats have done an outstanding job of exchanging the physical chains of slavery for economic desperation and dependency.

That may be why my actions and Joe Biden’s have been so different. In less than four years I’ve passed Criminal Justice Reform; created Opportunity Zones; guaranteed funding for historically black universities; and implemented economic policies resulting in the lowest black unemployment and poverty in history. Those accomplishments dwarf what Joe can claim after forty do-nothing years.

Yes, Black Lives Matter. Because all lives matter. Yes, we need police reform. We’re all in this together. We have to be. You want real change? Vote the Democrat bums running your deep blue cities and states out. What have you got to lose? It can’t get any worse than what they’ve produced.”