Obama & Me: How I Knew Obama Was a Bad Guy Before Anyone Else 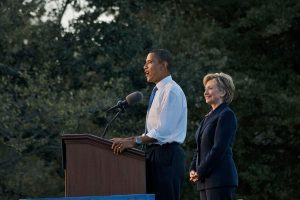 I’ve been writing about “Obama the bad guy” for many years. I was the first to name him the head of the “Obama Crime Family.” I was the first to coin the phrase “Obamagate” to describe his reign of crimes against candidate and then President Donald J. Trump.

Obama’s public persona was always a scam. I just knew the real Obama- way before anyone else caught on.

Take the column published days ago at Slate magazine by a liberal hack apologist for Obama. He sounded the usual liberal talking points: there is no “Obamagate.” There is no scandal. It’s a conservative conspiracy.

Then this liberal “Obama denier” named names of who the conservative liars are- Trump, Rush Limbaugh, Mark Levin, Sean Hannity and Wayne Allyn Root (yours truly).

These liberal hacks must all be reading off the same talking points. Only days before, I received a text from a liberal group urging Democrat voters to call their Congressman demanding more free money. Then they named the enemies of Democrats, standing in the way of more government aid- President Trump, Rush Limbaugh, Sean Hannity, Mark Levin and Wayne Allyn Root.

The same five names in both attack pieces. Interesting. All I can say is, “What an honor to be on that list. I’ve clearly just made All-Pro.”

But the liberal hack at Slate got the timing wrong. He quoted my column about “Obamagate” from 2019. I’ve actually been on top of this story since 2016.

Throughout 2016 and 2017, I wrote dozens of newspaper columns about the deep state conspiracy against Trump. In my newspaper column on September 23, 2017, I finally gave it a name, “Obamagate.” Because I knew every part of the scandal had Obama’s fingerprints all over it.

Obama was the capo di tutti of the Obama Crime Family. He gave the orders, he gave the approval, he was always in the room as each crime was hatched.

How did I know before anyone else? Why did I believe Obama was capable of committing such high crimes and treason? Because of my personal history with Obama.

During the 2008 campaign, I was asked in hundreds of media interviews, “Were you two friends at Columbia University? What was Obama like?” I always answered honestly, “I never met him, never saw him, never heard of him. And I don’t know a single classmate who ever met him either.” I repeated this story hundreds of times.

At the time, I was also a regular guest on Fox News, where I branded Obama as a radical socialist whose policies would ruin the US economy, retard economic growth, and kill millions of jobs. I was proven right. That must have made Obama even more angry.

I had clearly gotten under President Obama’s skin. Soon the IRS came knocking. I was targeted for destruction. It was a witch hunt, persecution and intimidation all in one.

It was the worst IRS attack any tax lawyer I spoke to had ever heard about. They all agreed that I was on the president’s “Enemies List.”

Tom Fitton of Judicial Watch took my case and together over a two-year period we forced the IRS to hand over my personal tax files. This was a political persecution based on my conservative political beliefs. The proof was literally written all over my files.

Who do you think ordered it?

President Obama clearly hated my guts because I had embarrassed him repeatedly in the national media. So, he decided to use the power of government to destroy me. That’s a crime, by the way.

If Obama hated me that much, think how he felt about famous billionaire celebrity Donald Trump, who had questioned whether Obama was even an American citizen. Trump had tortured Obama in the national media. Now Trump was about to succeed Obama as president with a promise to erase everything Obama had accomplished.

That’s how I knew.

If Obama sent multiple government agencies after his college classmate Wayne Root, think what he’d be willing to do to Donald Trump? The answer is anything and everything. Spying; unmasking; leaking; framing Trump and his top advisors; and then eventually in desperation when all else failed- a full-blown coup.

It was all Obama. It was always Obama.

That’s how I knew Obama was a bad guy before anyone else.