President Trump Has Made the American Middle Class Great Again 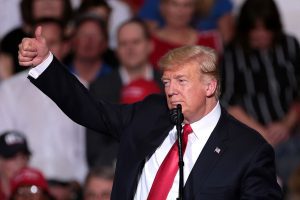 This entire Ukraine mess is what I call a con, a scam, a smokescreen, three card monte. A Democrat ”Weapon of Mass Distraction” meant to distract you from the real story.

I could report on the massive corruption, scandals, fraud and theft by Barack Obama, Hillary Clinton, Joe Biden and John Kerry. Billions of dollars were looted from American taxpayers by Democrats while Obama was president. That’s what this is really all about.

Democrats are trying to distract you from the truth.

And they’re desperately trying to discredit and destroy President Trump, and knock him out of office, before he can properly investigate and prosecute them. But I won’t report on this today. I’ll save that for another day.

I could be reporting on the fact that the CIA changed the definition of “whistleblower” only weeks ago to allow for a person with second-hand information to attack President Trump with unsubstantiated claims. Proving this was all a Deep State setup from day one. But I won’t report on that today. I’ll save that for another day.

I could be reporting that in 1998 (under President Bill Clinton) America signed a “Mutual Legal Assistance in Criminal Matters” treaty with Ukraine.

Because of that treaty, it is President Trump’s legal duty and professional responsibility to report and investigate corruption by U.S. government officials involving Ukraine. But I won’t report on this today. I’ll save it for another day.

I could report that after a lifetime of reading legal documents, I’m certain the “whistleblower complaint” wasn’t written by a layman. It was written by a team of the best lawyers and legal scholars that Democrat or Deep State money could buy.

Which means this entire episode was a premeditated hit job and Deep State coup against the president of the United States. But I won’t report on this today. I’ll save it for another day.

Because there are more important fish to fry. There is economic news out this week that far out-weighs the ridiculous, fraudulent Ukraine witch hunt.

This is what matters. Real Median Household Income is now the highest in the history of America (at $65,084 per family).

You do the math. Trump has increased middle class incomes by over FOUR TIMES better than Obama. In 30 months versus Obama’s eight years.

But this only includes income earned, not money saved by tax cuts. Because of the Trump tax cuts, the average married couple with two children saved over $2,900 in 2018 alone.

So, incomes are dramatically up, and so is the amount middle class Americans save from Uncle Sam.

Trump’s economy is a dramatic success. Obama’s was a miserable failure. That’s the main reason why Democrats and the mainstream media fill the airwaves with “Weapons of Mass Distraction.”

Trump has made the American middle class great again.