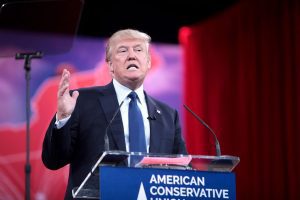 It’s all coming up aces for President Trump.

The wind is at Trump’s back. Now is the time to act boldly. As the old wisdom goes, “Fortune favors the bold.”

First, to the great news! The Trump economy is booming. No one, anywhere, expected the economic growth numbers out Friday morning. It turns out the US economy grew at a blistering 3.2% GDP in the first quarter. That beat Wall Street economist’s projections by a remarkable 50%. Trump just made all the “experts” like idiots.

This amazing economic growth came in the quarter with a 35- day partial government shutdown that ended in January. It came while media headlines screamed about “Russian Collusion” and impeachment. It came as economists and liberal politicians warned that Trump’s trade wars would damage or kill the economy. It came as the rest of the world is mired in recession.

That’s right- virtually every other economy in the world is in recession. While Trump’s tax cuts and slashing of regulations have turned the US economy into the envy of the world. Thank you, President Trump.

Trump is starting to feel “it.” He has the momentum. He has confidence. He has his “mojo” back. The world is Trump’s oyster.

He won with his National Security Emergency. Trump will build his wall- without any help from Congress. Days ago, the Supreme Court ruled Trump can detain illegals indefinitely while awaiting asylum hearings. Experts are confident based on the Supreme Court justices’ reactions, Trump is about to win a major victory with his citizenship question on the census.

And most impressive of all, the Trump administration just indicted a liberal activist Massachusetts judge who helped a twice-deported illegal alien escape from ICE in the middle of her courtroom. Yes, a sitting judge was just indicted for conspiracy to obstruct justice, obstruction of justice, aiding and abetting, and obstruction of a federal proceeding. Now that’s bold.

It’s time to strike while the iron is hot. Clearly President Trump is emboldened. So, here are the two Executive Orders Trump should issue immediately.

First, Trump needs to mandate Government-issued photo ID for all federal elections. I believe millions of illegal aliens are not only voting, but being encouraged to vote by the Democrat Party and countless leftist organizations. I have the proof on my cell phone from the 2018 election. Democrats and multiple Soros-funded voter organizations had me (obviously mistakenly) on their text lists. They were clearly begging illegal aliens to illegally vote…and to illegally vote multiple times…in Spanish. They hounded me day and night…in Spanish.

Now that’s real collusion and conspiracy between Democrats, leftist “get out the vote” organizations and illegal aliens to steal elections. No wonder Democrats want open borders.

Trump needs to end Democrat voter fraud once and for all. We desperately need Voter ID. I believe a president of the United States has every right and responsibility to issue an Executive Order to ensure election integrity. He certainly can order Voter ID for federal elections. Then request an expedited ruling from the Supreme Court before the 2020 election.

Secondly, Trump should issue an Executive order demanding the immediate arrest of any public official who provides “Sanctuary” for illegals. Just like that Massachusetts judge, public officials are sworn to uphold the law and the US Constitution. Politicians and officials of Sanctuary cities and states are breaking the law, obstructing justice and aiding and abetting criminals- just like that judge.

The rule of law is all that matters. If politicians are aiding and abetting law-breakers in Sanctuary cities and states, they should be arrested just like that judge. It’s time to send a message. It’s time to set an example. America is a nation of laws.

Mr. President, you’re piling up victories. It’s time to be bold. Fortune rewards the bold. You’re a gambler. Go for it!