The Change We’ve Been Looking For- Union Bribes and Indictments for Selling U.S. Senate Seats? 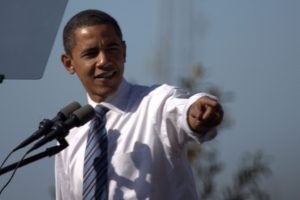 America wanted change and we sure got it. We elected a politician who looked and sounded fresh and new and different (and don’t forget “clean” as Senator Biden once remarked), and promised that magic
word “change.” Aren’t we lucky? It appears that the change we got is that we’ve moved Chicago machine-style politics into the White House. We found out on Tuesday what that business model consists of- the good Governor of Illinois was arrested for allegedly trying to sell Barack Obama’s United States Senate seat. Yes, I said sell Obama’s seat to the highest bidder. It’s nice to know even in this terrible economy, you can still sell a Senate seat. I wonder if Governor Blagojevich accepts credit cards? I can hear the announcement now in Marshall Fields department store on the Miracle Mile: â€œU.S. Senate seat on sale now on the 4th Floor- Ladies Lingerie.â€�

Governor Blagojevich’s â€œplay for payâ€� request allegedly included cash up front, major federal government appointments, and a high paying job or corporate Board appointment for the his wife. No wonder Democrats win the female vote in Illinois- this Governor is certainly committed to equality. The Blagojevich’s motto is â€œthe couple that commits fraud and extortion together, stays together (in federal prison).â€�

Keep in mind this isn’t just any Governor. Illinois Governor Rod Blagojevich is Barack Obama’s good buddy. Obama endorsed Blagojevich twice for Governor, and served as a top adviser to him. Blagojevich also endorsed Obama in his run for the U.S. Senate. David Axelrod, a top aide to President-elect Obama, said only days ago on FOX News that Obama had recently spoken to Blagojevich about potential replacements for his U.S. Senate seat. Now Obama denies they ever spoke. There’s our change- Obama’s story is changing swiftly to avoid political corruption charges.

The corrupt Democratic machine runs politics in Chicago. Obama came directly out of that machine. He endorsed the machine politicians again and again. He’s never supported a reformer. He’s spent his entire political career neck deep among that den of thieves. The politicians, bureaucrats and state government employee unions live high on the hog in Chicago. But the taxpayers get the shaft every day. Illinois has among the highest tax rates in the country. It’s now obvious why. You need high tax rates to pay top dollar for all those U.S. Senate seats.

Income tax, business tax, sales tax and property taxes are so high; they are driving residents by the thousands out of state. Illinois is a prime example of the folly, fallacy and failure of big government and big taxes. Business owners are overwhelmed by taxes in the state that the Obama family calls home. The result is a dramatic loss of jobs, businesses and residents. It’s a vicious downward cycle caused by liberal tax and spenders like Obama and Governor Blagojevich.

But this corrupt rotting corpse of a city named Chicago isn’t only known for high taxes. There are other bonuses for the people of Chicago- such as the worst public schools in America and the highest murder rate in the country. It appears all that tax money used for corruption, payola and bribes on behalf of politicians, unions and overpaid government employees hasn’t work out so well for the people of Illinois. If you elected Obama because you wanted Chicago, Illinois to be the model for America- congratulations, we all just won the reverse lottery.

You think selling a U.S. Senate seat is bad? That’s small-scale fraud. Obama has brought the large-scale fraud with him to Washington D.C. You see he was elected with the enthusiastic support of union leaders across the country. Auto unions are right at the top of Obama’s list of who’s been nice for Christmas. Obama owes his political life to his friends at the auto unions. He is expected to repay the favor. But this kind of corruption is called “legal bribery” in Washington D.C. The unions give Obama tens of millions of dollars in contributions, millions of votes, and millions of campaign “man hours” (union members go door to door, man phone banks, stuff and seal envelopes). In return, Obama, Harry Reid, Nancy Pelosi and the Democratic Congress gift-wrap a $15 billion loan to the “Big 3” automakers and their unions. That’s called payback. And that $15 billion loan is just for starters. Trust me, there are much bigger union bailouts and handouts on the way once Obama is sworn in on January 20, 2009.

The shameful auto bailout is really not much different than what the FBI just arrested the Illinois Governor for. One is under-the-table illegal fraud and bribery. The other is in-your-face, tit-for-tat, legal fraud and bribery. But they both emanate from the same Chicago-machine business model. The model is simple: you give something big to me (paid for by union members), I’ll give something bigger back to you (paid for by taxpayers). Who are the kings of Chicago? Unions. Who are the new beneficiaries of the auto bailout? Unions. Do you sense a pattern here?

I don’t mean to say, “I told you so.” But I told you so. I predicted it all weeks ago on dozens of radio stations across the USA. I predicted Congress would put on an Academy Award-quality acting job that would impress the likes of Pacino and DeNiro. I predicted the Democratic leaders of Congress would put on a world class charade for the nation to see- they’d talk rough and tough to the CEO’s of the “Big 3” automakers, rant, rave, demand major changes in their business model, and threaten to fire the executives responsible for this mess. They’d huff and puff before the TV cameras and put on a high profile reality show for the evening news- proving that the Democratic Congress owed nothing to auto unions. Proving that Congress was no friend of automakers. Proving that Congress was no pushover. Proving that Congress was carefully watching over the taxpayers’ money. But I predicted that behind the cameras, in the smoky backrooms, the Congressmen, the CEO’s and the auto union leaders were back-slapping and toasting to the stupidity and gullibility of the people.

I predicted they’d put on a show in front of the cameras, publicly berate and humiliate the CEO’s, and swear they’d never give them a dime. Then in a month, the same CEO’s would be back to D.C. (driving hybrid cars instead of flying in private jets), with hat in hand, and all would be forgiven. It happened just as it was scripted. Just without the drama of plastic Greek columns this time.

Suddenly, as if by magic, the skies opened, the sun shined, and a $15 billion bailout deal appeared. Despite that great big public lynching of the Big 3 CEO’s, the tough-talking Democratic Congress has decided to give the automakers another billion dollar handout. What a surprise!

I say “another bailout” because most Americans don’t even realize that Congress just gave the “Big 3” a $25 billion bailout in September- under the cover of darkness (distracted by the stock market crash and the Wall Street bailout). Of course, the bloated, corrupt â€œBig 3â€� auto unions who pay their workers almost $150,000 per year in salaries, pensions and benefits to drill fenders, and who elected Obama and the Democratic Congress with union money, just happen to be the biggest beneficiaries of this â€œBig 3â€� bailout. Just another strange coincidence in the D.C. corridors of power.

And lurking the whole time in the background- coordinating everything quietly, yet leaving no fingerprints, was the President-elect Barack Obama. Obama tipped us off as to the outcome days ago when he said publicly that we cannot allow the “Big 3” automakers to fail. That was Obama’s subtle sign to Congress to get the deal done. Just like a mafia don, Obama made it happen with a wink and a nod. And the liberal Congress delivered.

Obama has learned well from the corrupt Chicago machine and his good buddy Governor Blagojevich. Actually the student learned better than the master. Blagojevich is headed to federal prison. Obama is headed to the White House.

America demanded change. Well we have our change all right. By the time this cold-blooded Chicago gang of thieves is done with the taxpayers, all we’ll have left in our pockets is change.

Which brings up an important question: I wonder what kind of price you can get for the White House?