The Gift of Life: My New Year’s Gift to Conservatives 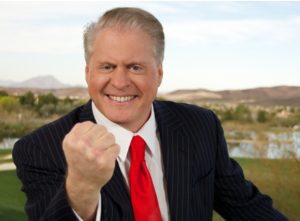 Happy New Year. As a nationally-syndicated conservative columnist, I write about politics 24/7/365.

Today’s column is different. This fulfills my New Year’s resolution- I was given a special gift in 2018. I’m thankful and I want to spread the word to others.

For most people, New Year’s resolutions are about getting healthier. Year after year, they promise themselves they will finally get healthy. But within weeks, they fall back into old patterns. They make excuses. And one day they get sick, or die. That’s a fact of life (and death).

I want to change that for my conservative fans and readers. Because we have one heck of a monumental battle in front of us. Exhibit A was a brand new Democrat Congresswoman announcing this week, in a public speech, why she came to Washington. It’s all about stopping President Trump and his conservative agenda. Except she let her hatred slip. She said she came to Washington “to impeach the mother-fuc–er.”

Do you understand the hatred we’re facing? We have one heck of a battle in front of us…a battle for the ages…a biblical fight between good and evil. A fight that will determine whether America and capitalism survives  or not. A fight for our children’s and grandchildren’s future.

So, you and I need to be in perfect health to wage this fight, to win this battle, to save America.

That’s why this column isn’t about politics. I want to motivate you to get in shape for the battle to end all battles. I want to kick your butt to get you in shape- like a Marine Drill Sgt. Today I want to share the gift of life!

My love affair with health and fitness began as I watched both my parents die 28 days apart of cancer. They died one floor apart in the same New York hospital in 1992. It was an experience I wouldn’t wish on my worst enemy.

I became a health and fitness enthusiast. For the past three decades, I’ve eaten a mostly organic diet, popped 100 vitamins a day, and exercised two hours a day. I thought I was in perfect health.

Then I went to see Cenegenics.

Cenegenics is in the business of “age management medicine” (ie healthy aging). They provide a scientific approach to healthy aging, custom-tailored to each individual. They have medical offices across North America.

Over 25% of their patient base is physicians and their families. I thought that was a great sign, so I decided to try them out.

I was assigned Dr. Robert Ledda, MD. He conducted a full day of blood and fitness tests. I’d never experienced anything like that in my 57 years of life. Here’s the problem- no one ever does extensive tests like this- until they get sick.

Then it’s too late.

Guess what this conservative warrior and fitness fanatic found out? I wasn’t so healthy after all. Dr. Ledda found several worrisome things wrong with me. The good news is all of them were caught early (including pre- diabetes and insulin resistance).

It turns out virtually everyone over age 50 has a ton of health issues just starting. All are reversible. Ifyou catch them early. A few years from now, if left unchecked, I could have been in severe, irreversible trouble. I could have been dead.

That was only a few months ago. Cenegenics changed my diet, my exercise routine, my vitamin regimen, while adding hormone therapy. In a few months, they completely reversed my health issues. My blood tests went from problematic to perfect. Dr. Ledda and I were cheering when we reviewed the blood tests!

And just yesterday I went into the Las Vegas headquarters of Cenegenics to do my first fitness test since I started. It was a grueling test on a bike hooked up to heart monitor and oxygen mask. In six months my fitness level increased by almost 60%!

Everywhere I go, people ask “What did you do? You look like a different person.” The callers to my national TV show on Newsmax TV say it on-air several times a night. It’s a nice feeling.

Now this conservative warrior is ready for at least 50 more years of combating liberals!

This is my New Year’s gift to you. Race to Cenegenics or a doctor with expertise in age management medicine. It’s cutting edge science. Find out what’s wrong before it becomes irreversible, or it kills you.

Trust me, I now understand that EVERYONE over age 50 has something wrong, whether they know it, or not. Catching it now, before you show signs of disease or illness is the whole ballgame.

Think about it. I worked out two hours a day in the gym for 30 years. I ate organic. I popped 100 vitamin pills a day. If I was experiencing the start of serious health issues, can you imagine what’s happening inside most American’s bodies?

We have a battle to win. We have a great country to save. We have to make America great again. We need to be in perfect health to wage it. We need energy. We need stamina. Web need to look and feel youthful. We have to take care of ourselves to win this ultimate battle of good versus evil. To save America for our children and grandchildren.

I hope I just saved your life. Happy New Year.