The Trump Wall is No Lie 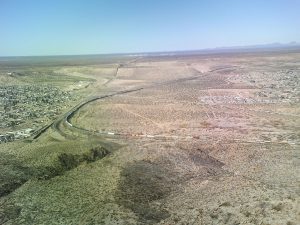 Have you heard about the new Democrat campaign slogan? “Make America Foreign Again.”

“The wall” is dominating the news as we reach New Years 2019. President Trump is threatening to shut down the border, halt trade deals and cut off all aid to Mexico and Central America. Fantastic! Happy New Year.

It’s about time a conservative plays hardball to save America; American exceptionalism; middle class jobs and wages; and capitalism. That wall is the only thing that can keep this country, the great American middle class and the GOP from being destroyed.

That’s precisely why Democrats lie about it 24/7/365. They clearly want that border open and porous. They want millions of illegal foreigners to pour into our country, to become dependent on government and vote Democrat for the rest of all time. That’s the Democrat pipeline and lifeline.

Keep the border open and Democrats turn America into a foreign country. A country where a majority of people need and want big government paying for their every need for the rest of all time. A country where people choose welfare over work. Where English is a foreign language. Where the US Constitution is a foreign document. Where capitalism is replaced by “social justice.” A socialist country.

It’s now or never. It’s do or die. Either President Trump gets the wall as a New Years gift to the American people, or it’s goodbye America. It’s time to play hardball. Shut it all down. The US government. The border. Aid to Mexico. Trade deals with Mexico. If we want to make America great again, anything goes.

Either we are the greatest and most powerful nation in the world, or we’re a weak, toothless, dysfunctional doormat. It’s time to find out.

Really? What a great teachable moment. Here’s where liberals and big government advocates miss the point. Every politician lies. Until now politicians have always lied about the things that matter to me and 63 million Trump voters.

Trump tells white lies that don’t affect my life in any way.

That’s precisely what makes liberals, the Deep State, DC Swamp and establishment politicians of both parties hate Trump. Trump is dangerous to them. On the things that matter in our lives- Trump tells the truth. His campaign promises are kept.

Obama lied. Hillary lied. How do I know? Their lips were moving. All politicians lie.

But Trump is the first politician to tell no lies- about his campaign promises. The rest I don’t give a damn about. If a politician lies or exaggerates and it doesn’t affect my life, I don’t care. But about taxes, regulations and the wall? If Trump keeps those promises, he makes America great again. He will go down as one of our greatest presidents. For keeping the promises that matter.

Build that wall. Because I don’t want to “Make America Foreign Again. “