Was This Our Last Ever Fourth of July? 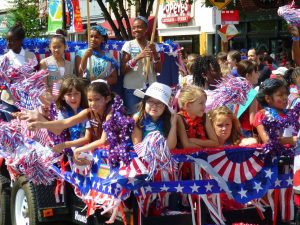 Was this past weekend the last time we will celebrate the 4th of July? Right now, that certainly looks possible.

About a decade ago I wrote the book, “The Murder of the Middle Class.” Don’t look now, but sadly…tragically…it’s really happening. The left is crazy, extreme, radical, violent and ready for civil war. The Republican right is…outside of President Trump…a bunch of pathetic wimps ready to raise the white flag. We are the closest we’ve ever been to losing America.

Have you ever seen as many spineless Republican politicians as we see today? Black Lives Matter is a Marxist group that funds the Democrat National Committee. GOP Senator Mike Braun says he supports Black Lives Matter. He also supports eliminating qualified immunity for cops. That’s the end of police in America. With Republicans like him, who needs enemies?

Senator Mitt Romney marched with Black Lives Matter. How can anyone be such a dupe?

We are in the midst of a war to save America and clearly these are not people you want in your foxhole. So, let’s ignore the Republican politicians. They’re useless. Now is the time…you either “Stand for America” or “You Stand Against America.” There is no middle ground.

It’s up to us- the people. We need to save this country. If Republican politicians are too weak, feckless, cowardly or corrupt to help us, it’s time to take the matter into our own hands. “If it is to be, it is up to me.” Screw the politicians. Get off the bench and get in the game.

If Trump isn’t re-elected, the Obama-Clinton-Biden-Pelosi-Soros cabal will quickly turn America into Venezuela.  Maduro proved how quickly it can be done. Democrats may not even need a second term. Although, with approval of mail-in voting and ballot harvesting, future terms for Democrats will never be in question…the votes will have been tallied before the elections.

And Basement Biden is no “moderate.” He’s now a hostage of the extreme radical left. The Bernie Sanders-AOC crowd now owns Biden. He’s “all in” for the Green New Deal. He just stated publicly “the police are the enemy.” His tax increases are four times bigger than Hillary’s socialist tax plan. And what was Biden’s response when asked if he supported trillions of dollars for reparations for black Americans? “Only if you include Native Americans.”

Biden will implement free health care, free college, guaranteed income, defund the police, open borders, and his personal favorite- destroy the suburbs with high-density, low-income public housing. And, that is only the start.

Let me issue this challenge to my fellow patriotic Americans:

IT IS TIME to stop being the “Silent Majority,” or we will soon be “the Silent Minority,” never to be heard from again. It is time to stand up in your church, your neighborhood, your community, your children’s school. It is time to speak the truth to family and friends.

Tell them about the Democrats’ plans to dramatically raise taxes; defund the police; eliminate bail; flood our neighborhoods with criminals and illegal aliens; flood our suburban communities with multi-density, low-income public housing; and destroy our economy with “free” everything.

Illegal aliens will have free health insurance, while you’ll pay quadruple, while waiting a year for a doctor’s appointment.

Under Democrats America will be a violent, lawless warzone, and you won’t have access to guns. The good people will be helpless “fish in a barrel.” The Democrat model will make us all Chicago, Baltimore, Detroit, Minneapolis with 700 buildings burned to the ground, or downtown Seattle run by a warlord.

Start preaching the gospel. Educate every person you know. But, don’t stop there. It’s time to volunteer your time. An hour a week, or two, or three, just for the next four months.

If we each make the commitment to change just a half dozen votes, or bring just a handful of Republican voters to the polls who weren’t going to vote…we will win in an electoral landslide come November. It’s not much to ask.

It’s time to put your money where your mouth is. It’s high time for good people like you to get off the bench and get into the game. The time is now, or never.

Come November 4th don’t be the one who sat on the sidelines during the most important election of our lifetime. It is up to each of us to ensure we have not just celebrated our last 4th of July.