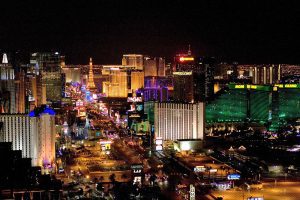 I’m Wayne Allyn Root. I’m both a nationally-syndicated conservative talk show host and a Las Vegas oddsmaker. Long before politics, I was dubbed by the media, “The King of Vegas Gambling.” I was good enough to be the first oddsmaker ever awarded a 180-pound granite star on Las Vegas Blvd on August 15th, 2006. It was “Wayne Allyn Root Day” in Vegas and the state of Nevada. You can see my star in front of Paris Resort & Casino.

Yes, I’m a gambler. I’m darn good at it. And I just made the biggest bet of my life on Trump to win re-election on November 3rd. No, I’m not crazy. I’ve been here before!

Democrats don’t realize it, but they’re starring in two famous movies. This situation is a combination of “Groundhog Day” and “Rocky.”

Why “Groundhog Day”? Because this is all an exact repeat of 2016. Back then every poll showed Trump would lose by a landslide. He was down by double digits in polls. And that was before the infamous “Access Hollywood” videotape leaked of Trump saying he grabbed adoring female fans by their privates.

Yet I never wavered. I knew Trump would win. And I said so repeatedly on TV and radio in the months leading up to Election Day. The reason I knew was “the whisper vote.” No one would say it out loud, but tens of millions of average middle-class Americans (otherwise known as “the Silent Majority”) were supporting Trump. They just wouldn’t say it out loud.

I made literally thousands of media appearances for Trump and was the opening speaker at many Trump rallies. Everywhere I went, I met people who leaned over and whispered in my ear “I’m with you. I’m for Trump.” It happened so many times a day, I named it “the whisper vote.” It was like “the secret handshake” of an exclusive club for patriots.

But there was another significant sign for me. My friend drove a taxi in Vegas in those days. She asked every customer who got in the cab, “I’m taking a survey. There are no hidden cameras. No one will ever know what you said. Who are you voting for?” She kept a running score. Close to 100% of her cab customers told her “Trump.” This, of course, didn’t match anything we heard from the pollsters. My gut told me this amateur cab driver poll was more significant than all the pollsters combined.

Knowing all this, I made the biggest bet of my life on Trump. I got 6 to 1 odds. Hillary was given a 99% chance of winning only three days before the election. We all know how that turned out.

Guess what? It’s Groundhog Day. It’s happening all over again.

The same exact pollsters have Trump losing by double digits again. The media is gloating. Democrats are already measuring the curtains at the White House. What a mistake.

Trump is a real-life Rocky Balboa. Trump is screaming “Hit me, c’mon, hit me, I dare you.” He gets hit, but he never goes down. Trump has failed a hundred times in business. He’s lost his entire fortune. At one point he was worth negative $4 billion. And of course, we all know he was counted out a thousand times during the 2016 election campaign.

But just like Rocky Balboa, you can never count Trump out. He’s relentless. I like to give this priceless advice: No one has ever gotten rich betting against America, or Donald J. Trump.

It’s all happening again- except on steroids. The polls are crooked- again. And of course, if anyone thought it was dangerous to announce your support of Trump in 2016, that was a picnic compared to today. Today you can be beaten to death for wearing a Trump cap. Today you can be firebombed for putting a Trump sign on your lawn. Today you will lose your job for saying “All Lives Matter.”

Today the liberal mob is destroying George Washington and Abraham Lincoln statues. They’re setting fire to the Virgin Mary. They’re looting and burning police stations. Democrat Governors are preventing you from going to church. Democrat Mayors are painting taxpayer-funded streets with “Black Lives Matter.” Here’s the best one of all: Museum curators are being fired for buying art pieces from white artists.

Today you’re taking your job, career, business and life in your hands to admit anywhere, to anyone, you support Trump.

You still think those polls are accurate? You don’t see it coming? This is Groundhog Day. And Trump is Rocky Balboa.

Trump’s not just going to win. It’s going to be an electoral landslide. The Silent Majority isn’t just angry this time around. We’re out for blood. We want revenge for what liberals have done to our country and economy. We won’t forget or forgive. We’re silent now. But we will speak LOUDLY on November 3rd.

I’m betting on it.